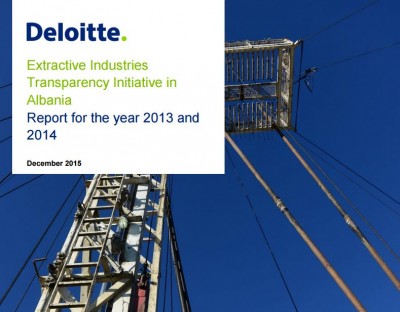 As part of the
ongoing implementation of this initiative the Albanian Government publishes this informative report on the
extraction of oil, gas and other minerals, contribution of this industry to the
State budget and allocation and spending of these income. The final aim of this
initiative is to promote transparency in order
to prevent corruption, and raise awareness among citizens to
demand from their Government proper use of the fiscal and non-fiscal income
generated from the exploration and exploitation of natural resources in
Albania.

The EITI report for
the years 2013 and 2014 provides an overview of the upstream oil and gas sector, mining sector and hydro-energy sector and reconciliation of main
flows paid by licensees and collected from the government agencies in these
sectors.

Based on data
reported by AKBN and ERE production generated out
of these sectors is estimated at USD 777 million in
2013 and USD 815 million in 2014. Whilst its
contribution to the National Budget were 8.7% of revenue
recorded in National budget in 2013 and 3.5% in 2014.

Contribution of the extractive industry to total employment in the country is almost
insignificant. AKBN reports that companies licensed in oil, gas and mining
sectors employee collectively less than 1% of
total employee workforce registered in the country in 2013 and 2014.

Crude oil comprised about 67% of
the total output in both years. Approximately 87% of total oil producedwas
extracted from the Patos-Marineza oilfields.
Chapter 2 provides an overview of regulatory and fiscal regime and
exploration and production activities in the three sectors.

All companies
operating an exploration license in oil, gas, and mining and a production
license in oil and gas were required to report under the EITI Standard. Thus, cash flows reconciled for the oil and gas sector represent 100% of
cash flowscontributed by the sector for the selected revenue
streams.

Because of the
large number of small-scale producers in the mining and hydro-energy sector,
certain materiality criteria based on annual turnover and production were
applied to select the most significant producers.

In the hydro-energy
sector, the MSG selected to report the 10 largest producers and 5 largest investments in the
pre-production phase.

By the date of this
Report cash flows were reconciled to 99% of cash
flows reported from licensees and the Government or licensees.

Section 5 and 6
present the reconciliation on an aggregated level. Company-by-company
reconciliation is presented in the appendices to the report. Table 3 and 4
below present a summary of the cash flow reconciliation.